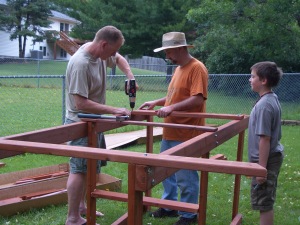 Finn turned three in May and Getty just turned one last week.  So, for their birthdays Brian and I and my parents got them a swingset for the backyard!  We looked around for swingsets locally and even asked some of our neighbors who have older children if we could buy their swingset.  When that didn’t work out and we didn’t find anything we liked within our price range, I found an adorable ship shaped playset online through Toys R Us.  I decided to order it.Unfortunately, it took an ENTIRE month for the playset to arrive at our door, despite shipping from the warehouse two days after I placed the order.  I had alot of issues with Toys R Us’ customer service but won’t go into all of that.  This would just end up being a rant instead of a fun blog post.

The swingset arrived last week on June 14th.  Brian has been gone all of June and will be gone most of July so I was sure this wouldn’t be up and running for awhile.  But then my brother called and offered to help!  Yeah for brothers!  So Jeff, his wife Sheila and their two kids came over Sunday and helped Brian (who was actually home for a day) assemble the swingset.  I tried to stay out of the way as much as possible so that I wouldn’t annoy the guys.  Sheila was supervising so I knew they were in capable hands and she was keeping them on task. 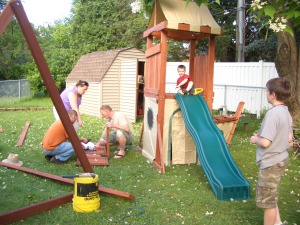 They started at 11:00 in the morning and finished at 8:00 at night.  The swingset is mostly together with a few things left to do (figure out the stupid rope ladder, put the rail on the stairs to get up to the slide and put together the seesaw swing thing).  The instructions were as awful and poorly written as we imagined they would be but the swingset is sturdy.  I’m sure all the bolts and other hardware aren’t completely in the right spot but it looks good!

I’m really excited about this swingset and all the adventures we’ll have on it as the boys grow up.  I remember playing on our swingset (an old metal one without all these bells and whistles) and in our sandbox for hours.  Jeff and I and our friends played and played and played in our own backyard.  I can just imagine Finn, Getty, Grace, Myles, Lucy and Alice and countless other little buddies playing together and creating their own backyard adventures! 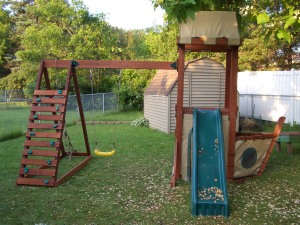 Finished (well…mostly) and ready for adventures! 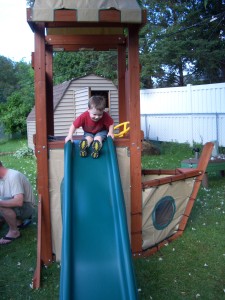 Finn couldn’t wait for them to finish the assembly before trying out the slide!