Last week, I wrote about feeling “done” with my third pregnancy and being tired, crabby and exhausted.  Well…I’m done!  I had my third child and son on Wednesday, November 28th in the early afternoon.  He arrived three weeks early and is a beautiful, healthy six-pounder!  Despite having nine months to prepare for his arrival, it seems almost impossible that he is here and that we have three boys.  We are now a family of five.

I had a regular OB appointment on Tuesday morning and ended up being at the clinic for over two hours.  My doctor was concerned about the intense itching I was having so I had to do some lab work and I also told him that I had been “leaking” for several days.  He did a few tests, thought it was amniotic fluid and said he was sending me to the hospital.  He also told me that I would probably be staying at the hospital and might be having a baby soon.  I looked him in the eye and said “HOLY CRAP!” and we both had a good laugh in the office. 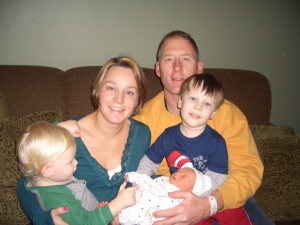 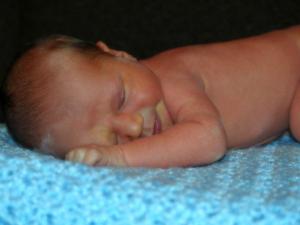 Brian had already gone home to help with the boys (my mom came right away!) and there was no reason for him to stay at the hospital.  About 4am, my contractions really picked up and I could feel them quite strongly.  I called Brian at 4:25 and he was at the hospital by 5:15.  I was in quite a bit of pain and the contractions were steady but I was managing.  After almost four hours of labor, I was only dilated to about 5 centimeters and knew I needed some help.  I asked for an epidural (which I really debated about in my head) and in hindsight, am glad I did get one.  Our son wasn’t born until almost 1pm so I would have had a long, tiring five hours ahead of me without the epidural.  I couldn’t feel the contractions but could feel the pressure of our baby moving lower and knew when it was finally time to push.  I pushed on and off for about an hour.

It was a quiet birth – just Brian, myself and a FABULOUS nurse who was an amazing coach!  The doctor came it at the last-minute, put on her gown and told me to give it one last push.  I did and she told me I could stop pushing and reach out for my baby.  I pulled him out and onto my chest.  Brian cut the cord.  We hadn’t done either of these things with our previous two births so it was really amazing.  I laid there with my beautiful baby for several minutes and we were so happy to meet him.  It took us awhile to even ask if he was a boy or a girl!

There’s more to this story, as there always is with a birth story.  But, I’ll spare you ALL the details.  This is a time of so many emotions, despite this being our third child.  I feel so many different emotions right now and at the time – joy, happiness, fear, concern – but the feeling I had more than anything at the time was relief.  Relief that he arrived safely and is healthy.  Relief that I didn’t have to have a c-section.  Relief that I am safe.  Relief that the delivery was uncomplicated.  Relief – just relief.

During the labor I would often look at Brian when inwardly I was afraid or in a lot of pain.  I didn’t need to say anything to him.  He knew what I was thinking – that I wanted everything to be okay.  He felt the same way and told me afterward how often he worried during the pregnancy and delivery.  He never said anything to me, but I knew he felt that way too.  It’s an amazing thing to carry and have a child, but it is also extremely worrisome.  We’ll have other worries over the years, but the one that this child arrive safely into our world is over.  Now, we just enjoy our beautiful Patrick Sullivan Corcoran and manage our three sons!

One thought on “A Birth Story”